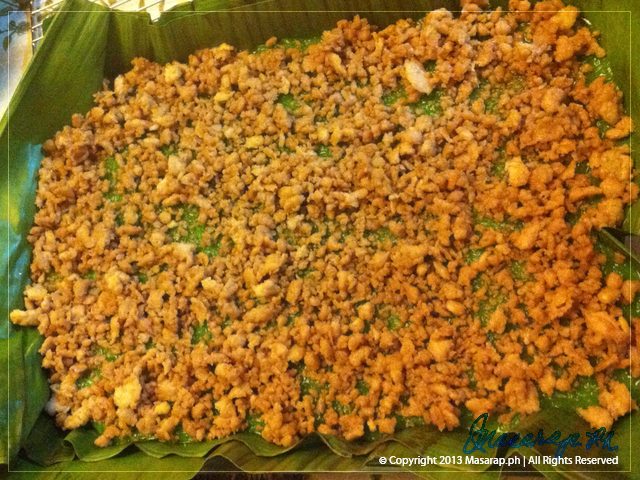 Duman is the gold edition of malagkit rice (sticky rice). The best duman is grown in Santa Rita, Pampanga. Planted during the rainy season, it waits for the cold weather of November and December before it is harvested. Duman is actually immature sticky rice. The rice is harvested while is it still immature and green. It is hand harvested; hand roasted; hand pounded; hand sifted, and therefore costs a mint! The cost of one ‘pati’ (about 3 kilos) of this young rice is equivalent to a fifty kilo sack of ordinary rice. Whoever thought of this process must have been a real gourmand and a glutton for work. One can eat the duman, raw, just as it is. The usual way one eats duman with is steaming hot chocolate. In a cup of hot chocolate, one sprinkles about 1/2 cup of the duman into the chocolate and then slowly spoons it into the salivating mouth. The other method of eating duman is to get newly harvest palm (sasa) juice that has been warmed and the duman sprinkled on it too. The reason that duman is so expensive is that only a few know how to do this and that they can only harvest it in its prime, which is only a few weeks. There is also available the ‘over the period’ kind but it’s already the stage when the rice begins to harden and cannot be eaten raw. There is also the fake kind, people color the ‘pinipig’ (as it’s also known) green. The true color of duman is a pale yellow green. So once a year, we were able to taste this precious sticky rice. There were times when I had more than I could eat and that is when I started to experiment with this. I know very well that you will not be able to do this; the basic ingredient is prohibitive and only comes out once a year for a few weeks. But then I wanted Filipinos to know that such a dish exists and it can only be found in the Philippines.

During my catering days, I would serve this and got requests to serve it again and had to turn them down because of it’s unavailability. I would just say, try again next year. It is very easy to make but hard to find. There is a saving grace in all this, one can freeze the duman even for a year. Wrap the duman in wilted banana leaves; then wrap with foil; wrap with Manila paper; then place in a resealable plastic bag; then freeze. The secret is keeping the duman moisture free. If you want to eat it raw, take the amount you want and leave at room temperature and then eat it.

How to Make thinned Coconut Milk: